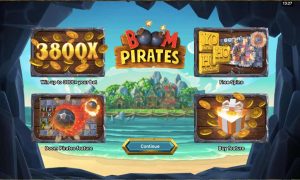 Boom Pirates is a Foxium game released under the name of Microgaming. The game takes place on a pirate ship, as the name of the game suggests. It concerns the pirate ship of Mary, Ben, and Roger and the game has a lot of features and other special game elements. 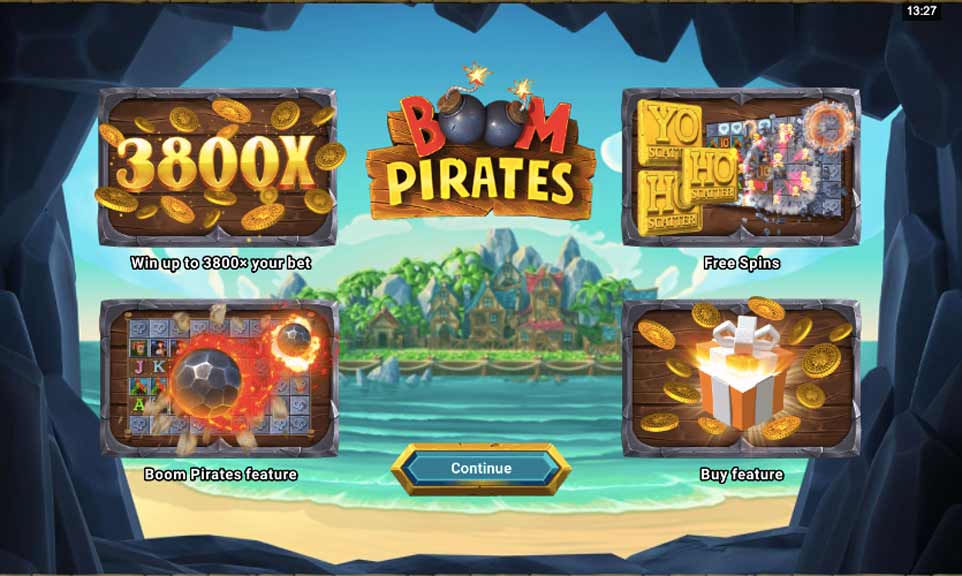 The RTP, or return to player, for this game is 96,19%. This means that the casino returns this percentage of all bets back to the players. The volatility or variance is medium. Medium volatility means that the game scores on average in terms of the frequency and amount of the payouts.

The original playing field consists of 6 reels and 4 rows. Later in this review it will also become clear that there may be more during the game. For that reason, it is also indicated to the left of the slot machine how many ‘wonderways’ (paylines) are possible at that moment in relation to the total. At the bottom left is a button with which the Buy a Bonus feature can be purchased. You will also find the amount in your account, the ‘spin’ button, and the option to adjust your bet. In the background you can see a piece of land with a number of houses on it. On the left is the water with a docked pirate ship. 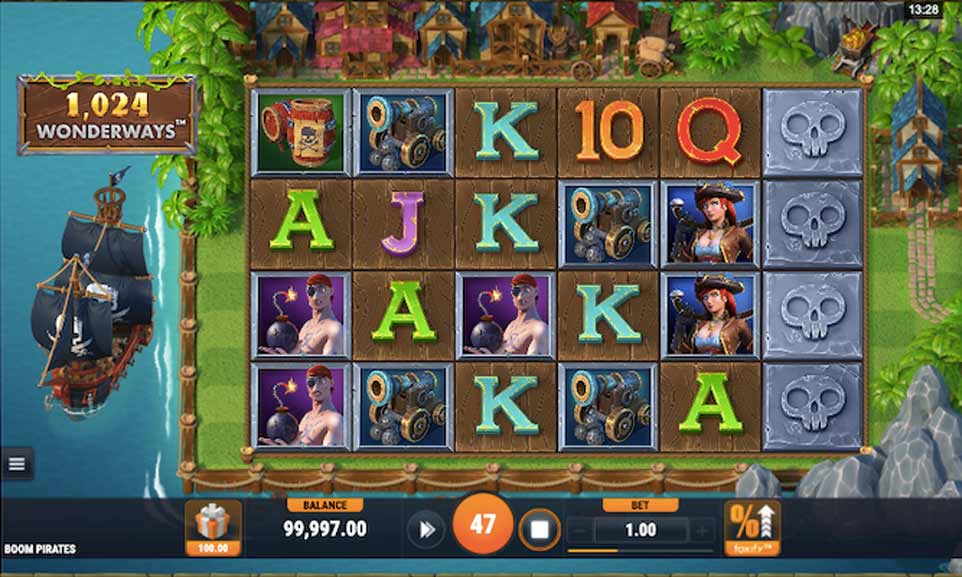 How does Boom Pirates work?

As mentioned briefly, this online slot machine can get multiple reels or rows during the game. This can increase the number of possible paylines from 1,024 to 10,077,696! We often see this number of paylines at Megaways, but then Boom Pirates has a lower variance. In addition, there are some nice features, but more about that later! Furthermore, the operation is essentially quite simple. Choose a bet, hit spin, and hope for great prizes, features, or the bonus round!

How do you play Boom Pirates?

First a short introduction to the ‘Foxify Feature’. With this feature you have a better chance of achieving the bonus round. This is accompanied by a bet that costs 1.5 times as much as usual. You see this feature more often in Foxium slots. Then determine your bet. Normally this can vary between 0.20 and 50 euros, but with the Foxify feature this will be 0.30 and 75 euros! 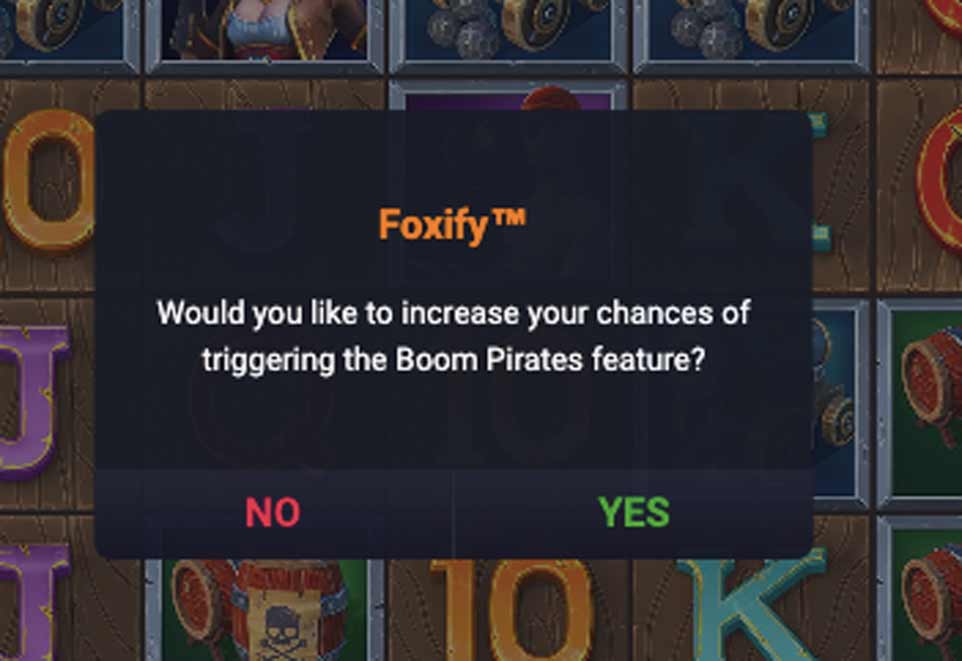 After this you press spin and hope for nice combinations and prizes. This combination can consist of up to 6 symbols in the base game. There are also a number of ‘random’ features, which we will explain in a separate heading below! You unlock the bonus round by spinning a golden bonus symbol on the first, third and fifth reel! 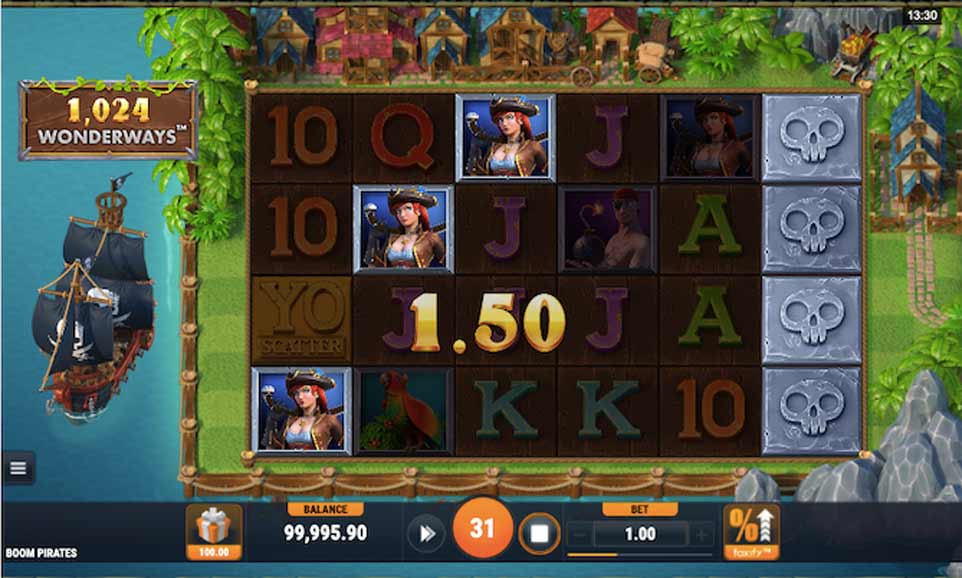 As usual, the prizes depend on which paylines you complete. In addition, the symbol with which you do this is also important for the amount. Mary and Ben are worth the most. Mary pays up to 37.5x (25x with Foxify) your bet and Ben 25x (16.67 with Foxify). The real prizes can be won in the bonus round and the features can also help.

The normal symbols are those of a card game: 10, J, Q, K, and A. The value is also in this order from low to high. Furthermore, in terms of symbols you have a female and male pirate as character, a cannon, and a barrel. As usual, these premium symbols yield more than the basic symbols. You also have the aforementioned golden bonus symbol with which you can unlock the bonus round.

The first random feature is the ‘Mary’s Swashbuckling Attack’. During every spin that yields nothing, this feature can just pop up! It then causes 5 symbols to be changed so that you win a 5 of a kind. You will not get very large amounts with this, by the way.

A more lucrative feature is the ‘Boom Pirates Feature’. You have a better chance of this when you play with the Foxify feature! This feature allows for extra reels or rows. How many extra reels and rows is randomly determined and can be up to a maximum of 9 reels and 6 rows! 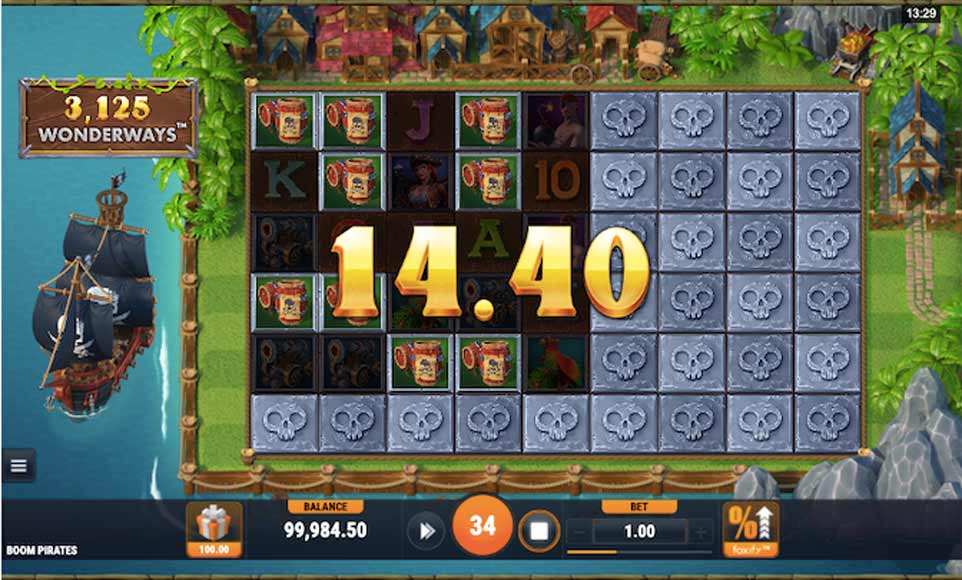 The bonus round starts just like the normal game with 6 reels and 4 rows. These are always expanded by the bombs. This also increases the number of possible combinations and the number with which these combinations can be formed! You get 10 free spins in which the playing field is expanded in between. Try to make as many beautiful combinations as possible within these 10 spins! 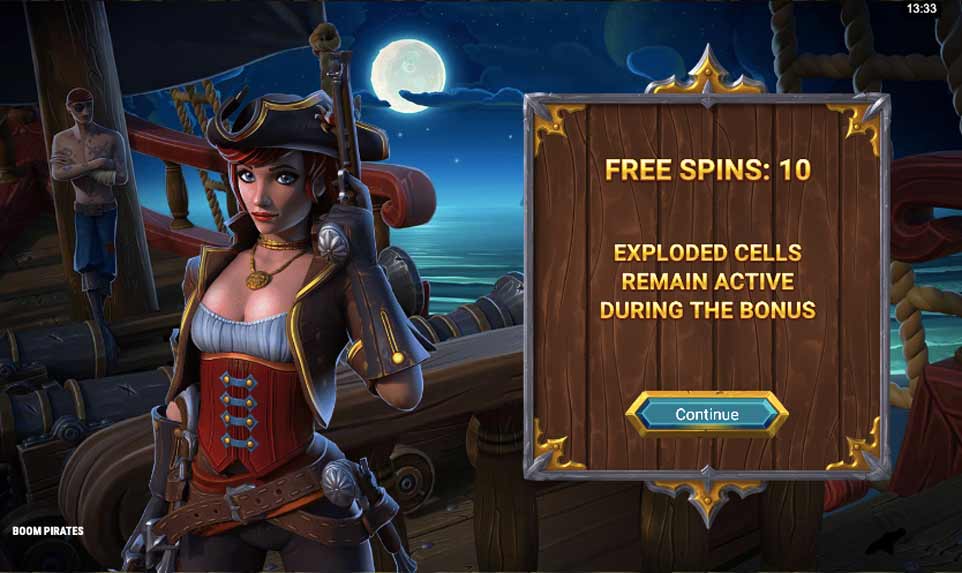 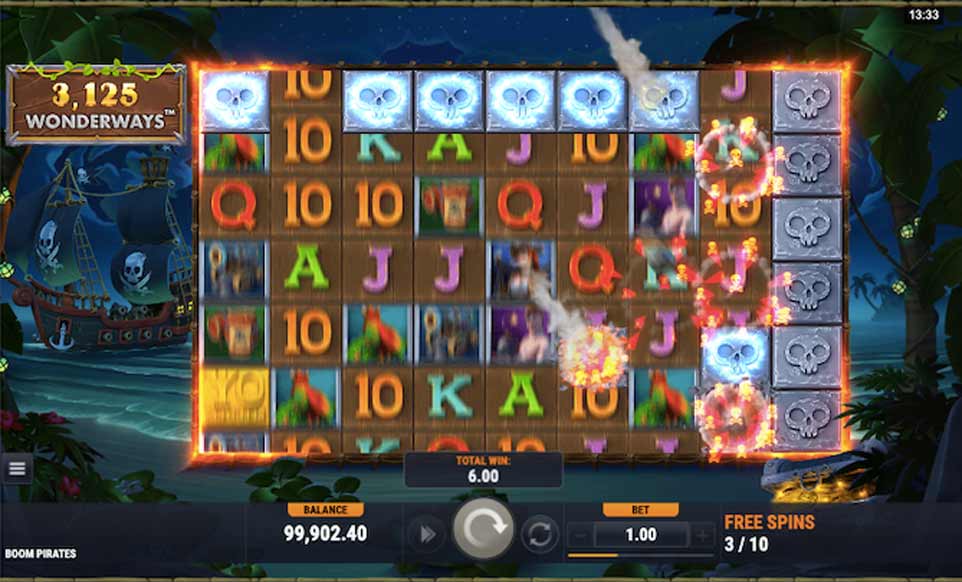 This feature is increasingly seen in online slots nowadays, and also in Boom Pirates. For this game you have to pay 100x the bet amount to be able to play the bonus round immediately. For example, if you pay 200 euros, you play the bonus round as if you were playing with 2 euros. 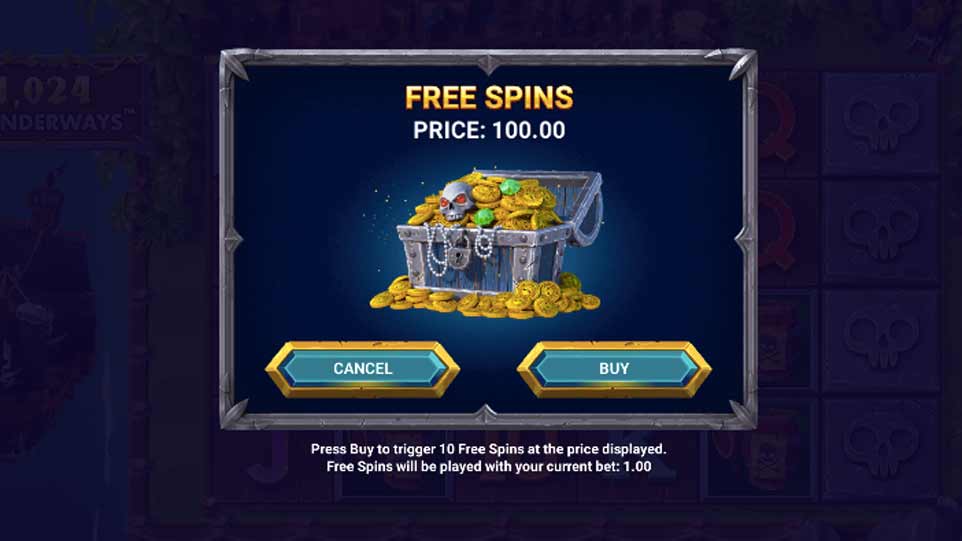 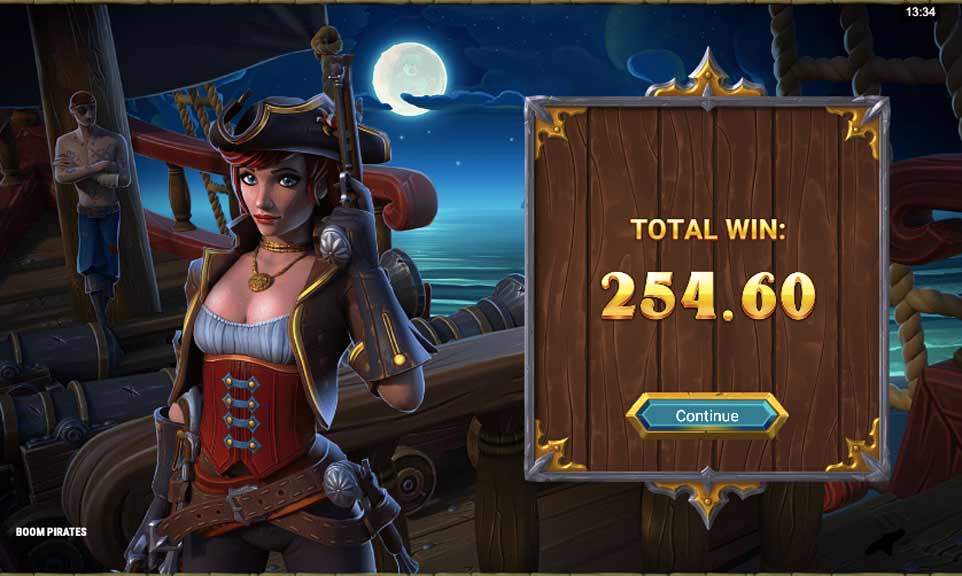 The biggest prize to be won is 285,000 euros! In addition, the game overall scores 3/5 stars. The large number of possible paylines is unique and therefore exceeds the number of megaways slots.

Have you ever played a similar game with over 10 million possible paylines? Chances are not, and it is certainly fun to give this a try!