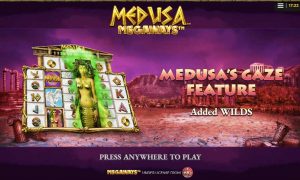 Medusa Megaways is a game developed by one of the largest and oldest game developers: NextGen Gaming! It was also inconceivable that this provider would not release a megaways game, as the popularity of these games continues to grow. This is their first variant, and they have therefore chosen to combine it with one of the most successful games they have made (Medusa). We can already tell you that this was a very good choice, and why this is the case you will find out in this review! 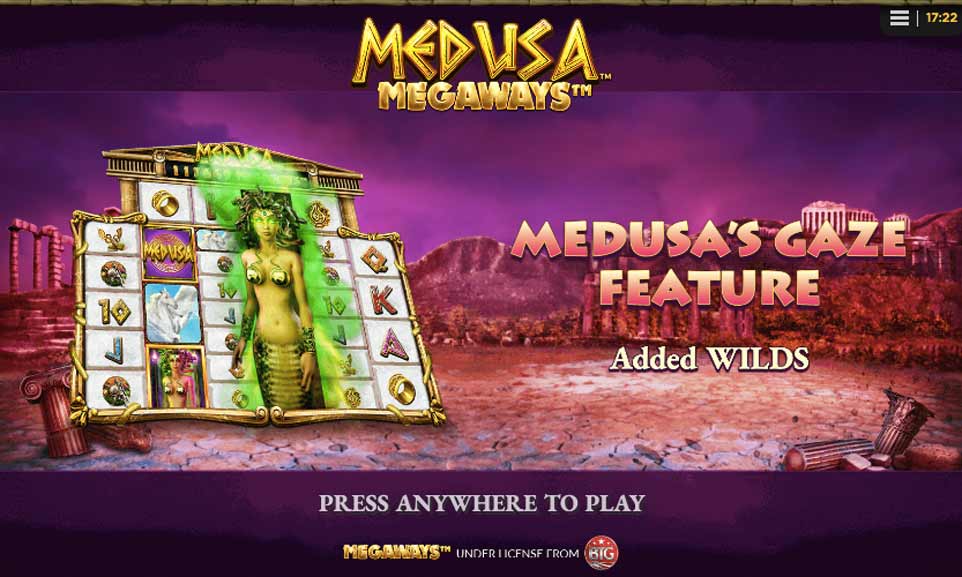 The RTP, or return to player, for this game can vary between 96,28% and 97,63%. This means that the casino returns this percentage of all bets back to the players. The volatility or variance is high. A high volatility means that you win less frequently, but large amounts.

The design of the game looks very clear, and has a familiar appearance. As we are used to from megaways slots, the playing field has 6 reels, and these reels each have a different number of rows per spin. Above the playing field is the title (Medusa) with below it the number of megaways you can achieve in that turn. The middle four rows have an extra box above the roll, and these are always included. You’ll find the ‘Buy a Bonus’ feature on the left side of the playing field, and on the other side you will see the menu, your bet determination, autoplay, and the ‘spin’ button in a circle. At the bottom of the screen, you can find your balance and your bet. 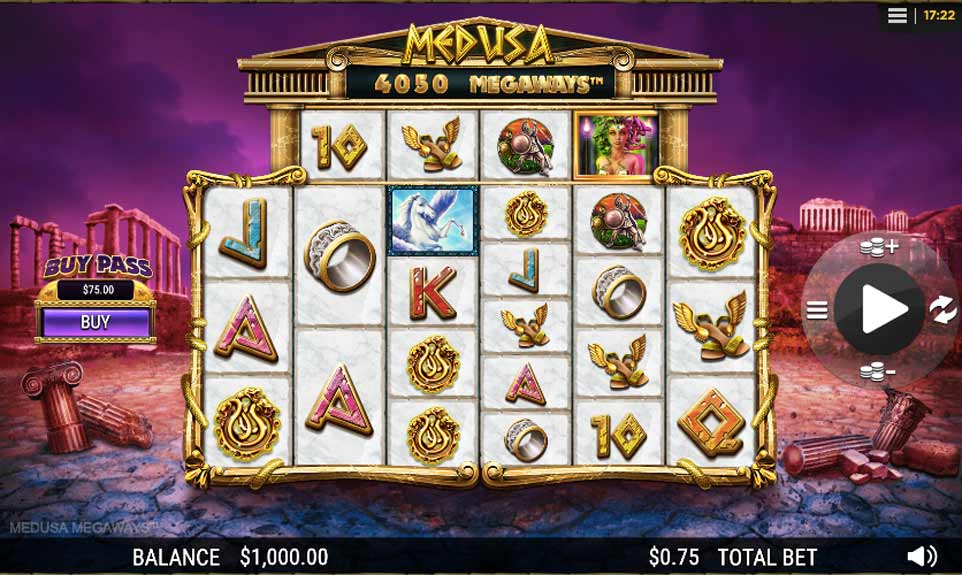 How does Medusa Megaways work?

The design of the game is comparable to games like Bonanza and Extra Chili, of which megaways variants are also made. Given the number of 6 reels and a maximum of 7 rows per reel, you can have a maximum of 117,649 megaways per turn! Megaways are the number of possible ways in which you can combine and win something. Try to make as many combinations as possible each turn, and reach the bonus round! After the bonus round another nice feature has been added, but more about that later! 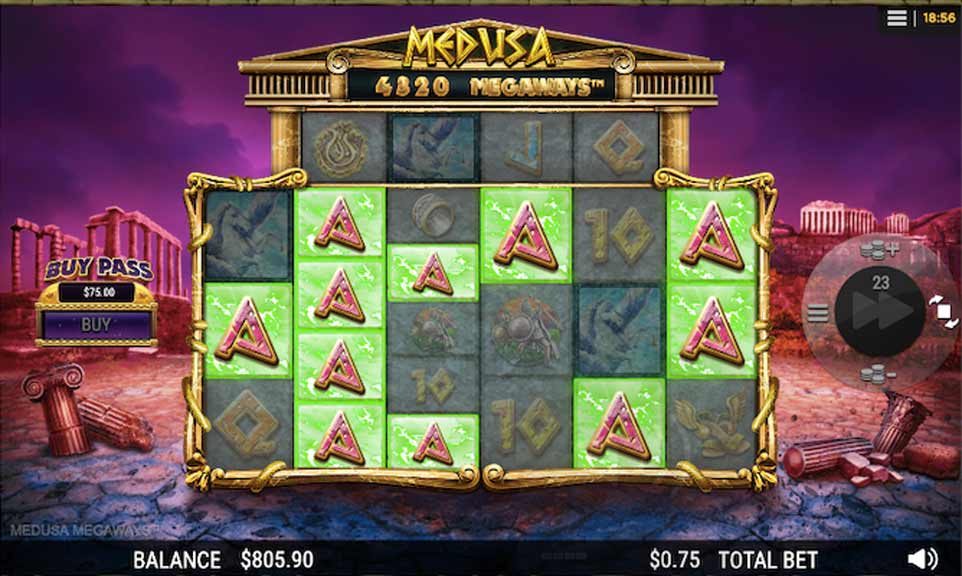 How do you play Medusa Megaways?

First choose a bet, and then decide whether you use the autoplay function or click each turn yourself. The autoplay function is definitely recommended, as the turns pass fairly quickly. After this, the game actually works as we know the megaways slots, and is hoping for nice prizes. Of course, you can win the real prizes in the bonusround, and they added a nice new feature!

The symbols are certainly familiar to you, if you’ve played Medusa or Medusa 2 before! As usual, 9 to A form the basic symbols, so they yield the least. In addition, you have quite a few premium symbols, which generally pay out better! Medusa itself is the wild symbol, and it can replace any other symbol. The last symbol we discuss here is the bonus symbol, or the scatter symbol.

You are probably familiar with the fact that the base symbols yield less than the premium symbols, and that the wild helps you form combinations. Below are the payouts for a number of 6 of a kind, so that you have an idea:

The most known feature in Megaways games is the Cascading Reels Feature. Every symbol which is part of a winning combination will disappear from the playing field. Other symbols return for this, giving you a chance to win new combinations within the same bet. This proces will repeat itself as long as you keep making new winning combinations. 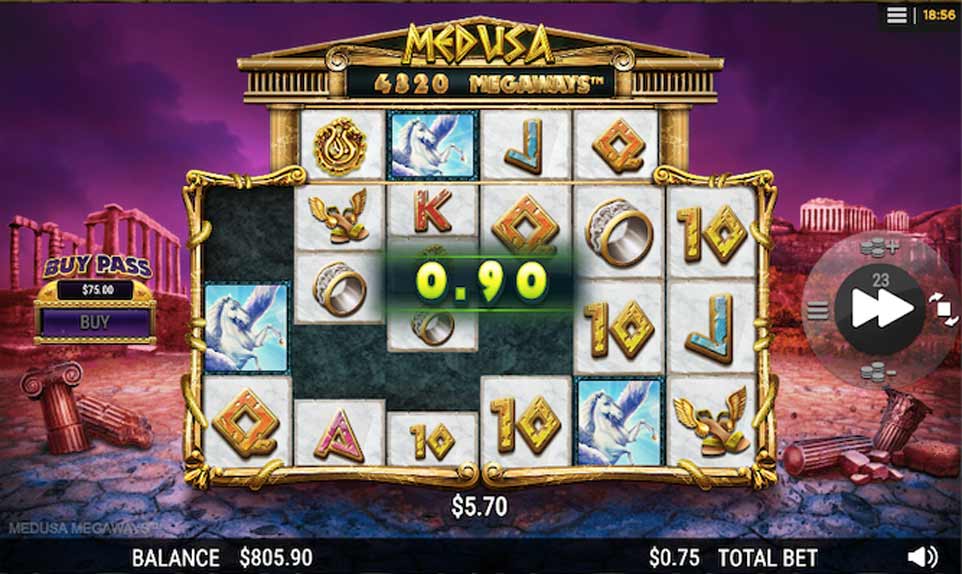 At least 1 Wild must land on the top reel for this Feature. So there can be more, but at least 1 is needed to possibly activate this bonus. If activated, Medusa will completely cover the reel(s) under the Wild symbols. Then Wilds will be left on the reels where Medusa is active! This feature is also possible to activate in the Bonus Round. 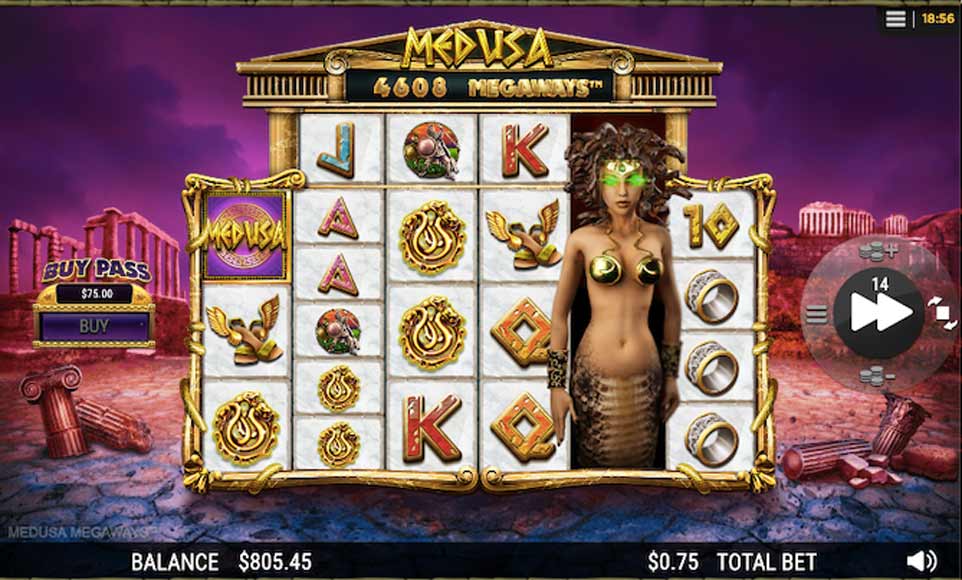 Unlock the bonus round by collecting at least 3 scatter symbols, and enjoy the big prizes! With 3 scatters you already get 10 free spins, and with every extra scatter the number of spins increases by 5! 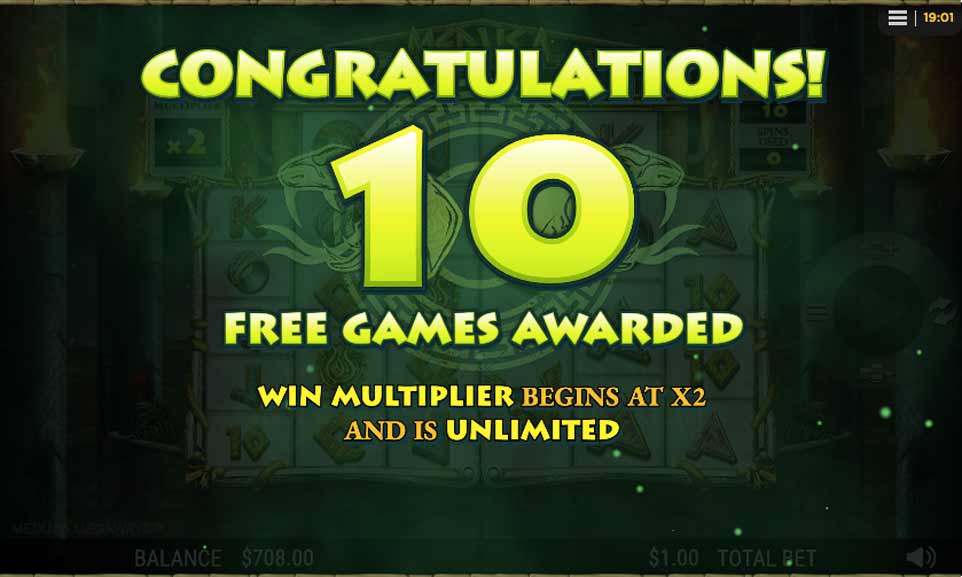 The multiplier, on the other hand, starts at 2x, and increases by +1 for each winning combination. Also during the bonus round you can grab 5 extra spins with 3 scatter symbols, and the multiplier has no limit! 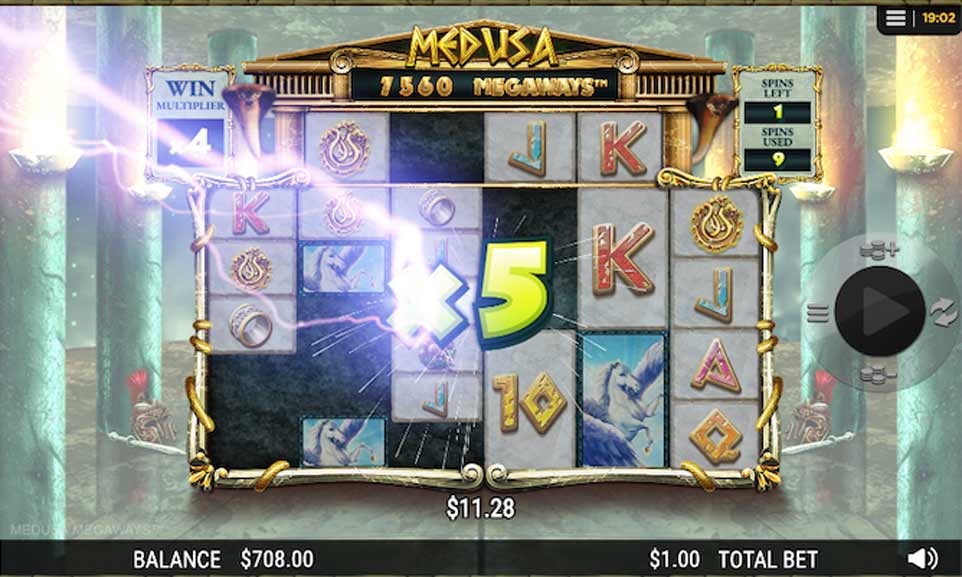 This Feature was developed specifically for the Bonus Round! This is about the two snakes that you see on both sides of the top roll! As soon as a Soldier appears on the reels, one of these snakes will attack him! The left snake will make the soldier turn into a Wild, while the right one turns em into a Scatter symbol! 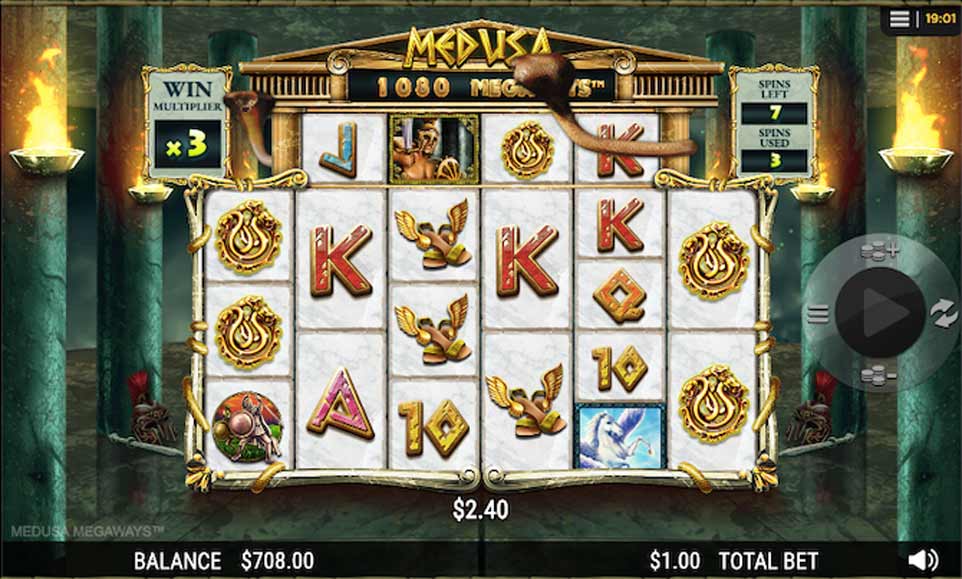 The ‘Buy a Bonus’ Feature is now a well-known concept among the players, and this feature has also been added to Medusa Megaways. Pay 100x your normal bet and immediately unlock the bonus round! 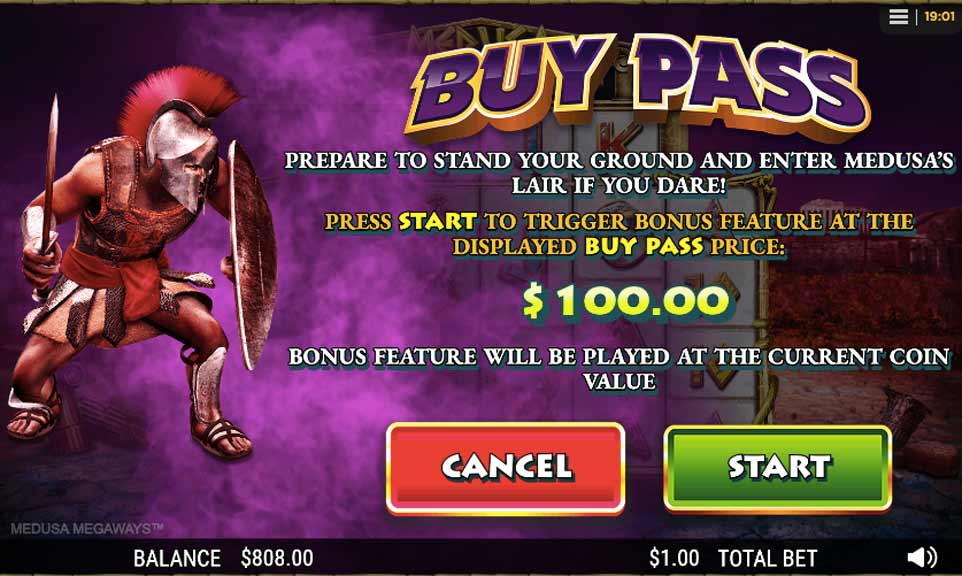 However, this is not a guarantee of profit, as the prizes are adjusted to your ‘normal’ bet. 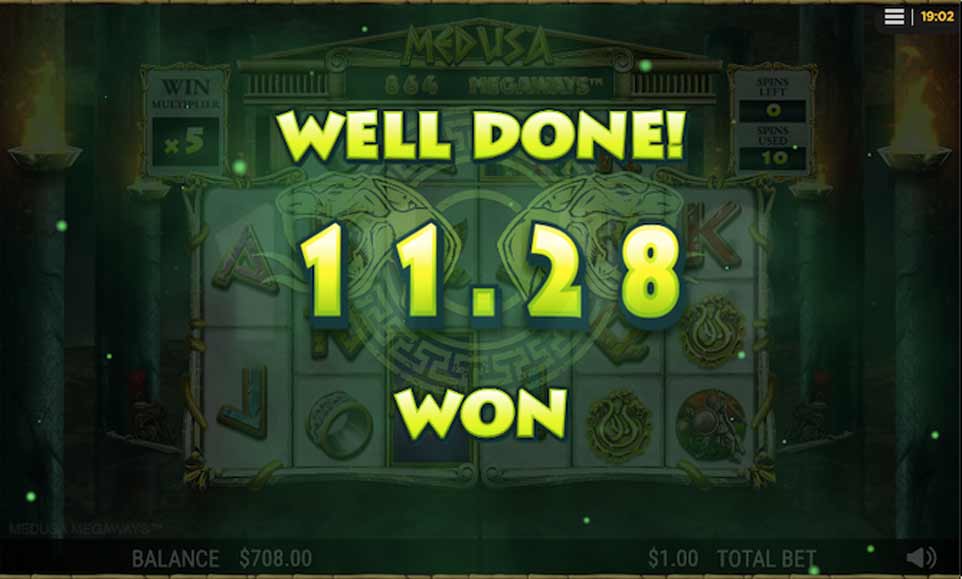 This feature is a lot more unique, and gives you the right to choose to play the bonus round again! This is of course great if you don’t make a profit, but can make you doubt if you already have profit. Think carefully about this! 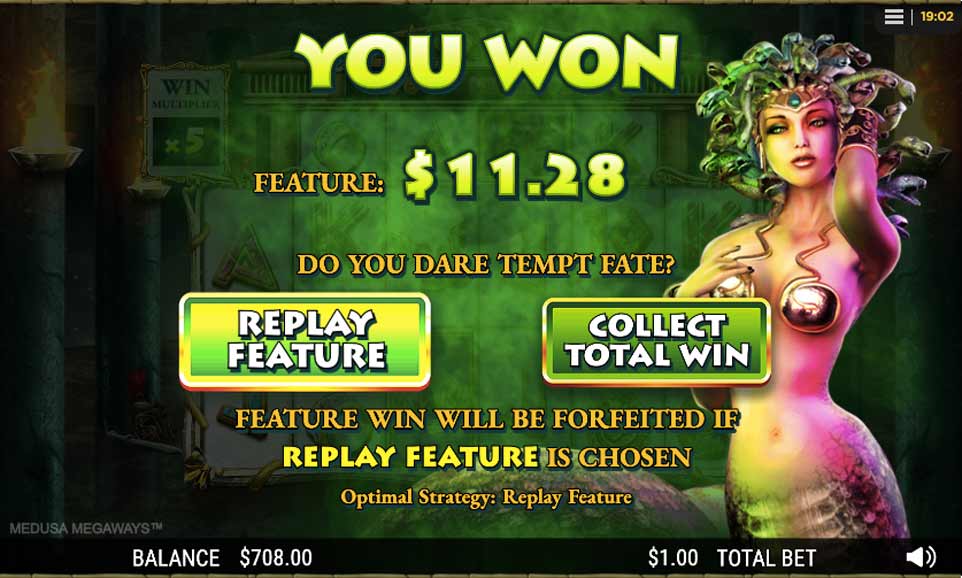 The maximum win is huge and stands at 50,000x your bet. So there is a limit, since the multipliers can continue indefinitely. The game also scores 4/5 stars and this is a fantastic score.

It has been a very smart move from NextGen Gaming to make their first megaways slot machine about the famous Medusa game. This immediately attracts a lot of attention, and they are assured of a successful game! In addition to the high RTP and gigantic prices, the game also offers a nice extra feature!