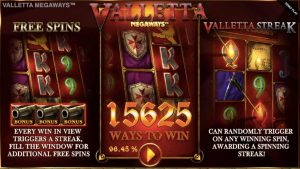 Malta is of course a central point in the gambling industry, as many major powers are based here. Valletta is the capital of Malta, and BluePrint Gaming wants to put the city in the spotlight in this way. The name of the city (Valletta) comes from the history books, in which the Turkish invasion was conquered under the leadership of one ‘Jean de la Vallette’. But enough about the name and background of the game. Read on if you want to know everything about this new top game from BluePrint Gaming! 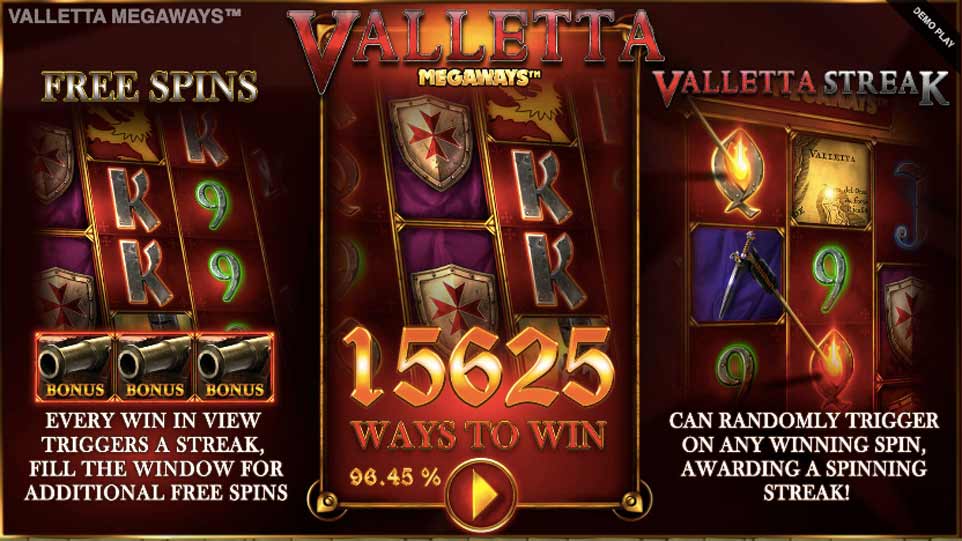 The RTP, or return to player, for this game is 96,45%. This means that the casino returns this percentage of all bets back to the players. The volatility or variance is high. A high volatility means that you win less frequently, but large amounts.

Let’s start with the background, which shows the Maltese coast with some details such as a fortress and a sailing ship. You can describe the music as fairly dramatic, matching the story behind it. Then we arrive at the playing field, consisting of 6 reels with an alternating number of rows (maximum 5). At the top is a box that shows the respective number of megaways each turn. On the left side of the screen you will find the ‘Buy a Bonus’ feature, but also the reference to the menu. The right side of the screen contains the choice of your bet, the ‘spin’ button, and the autoplay function. The bottom edge of the screen provides additional information about your balance, your chosen bet, and the amount you may win. 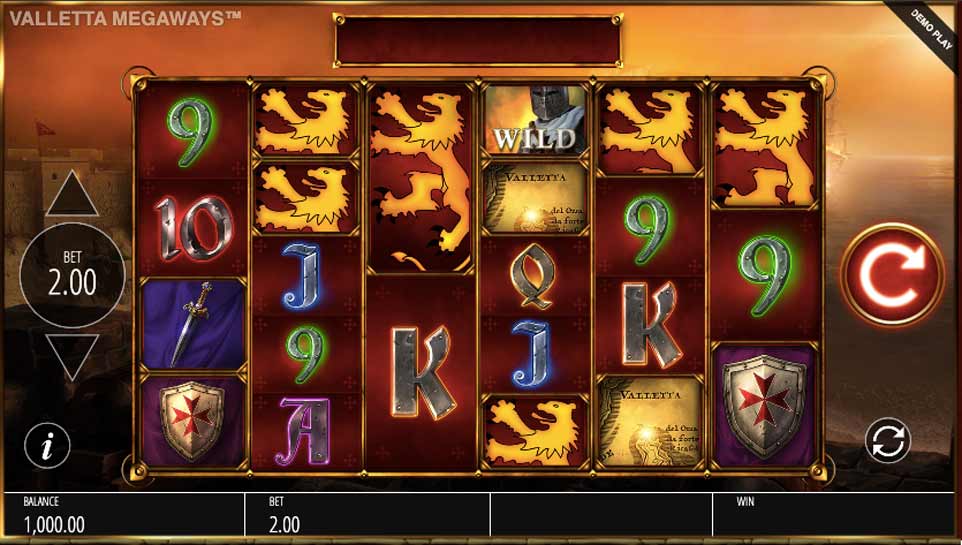 How does Valletta Megaways work?

The game obviously works according to the megaways principle, and as mentioned above, the playing field consists of 6 reels with an alternating number of rows. Since 1 reel can have a maximum of 5 rows, you end up with a maximum number of megaways of 15,625 per spin! You can form combinations from the first reel, and winning combinations ‘explode’ to make room for new symbols. This process can happen a few times within 1 turn, as long as you keep forming winning combinations. Try to spin valuable combinations, or even reach the bonus round! 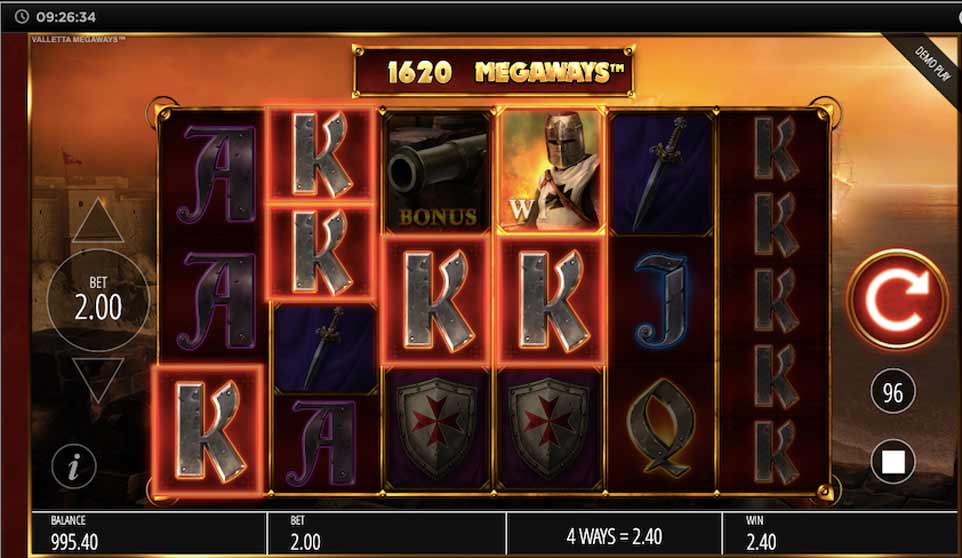 How do you play Valletta Megaways?

Before you start playing, there are a number of small actions you need to take, such as determining your bet. As with many megaways variants, you can choose from a number of amounts between 0.10 euros and 10 euros. Choose an amount that makes you feel good, and then choose whether you want to use the autoplay function. The alternative to this is to simply press ‘spin’ each time per turn. After this you can start the game, and hopefully you will be able to reach the bonus round. You can grab big prizes here, but that is why you always have the choice to buy this round directly. 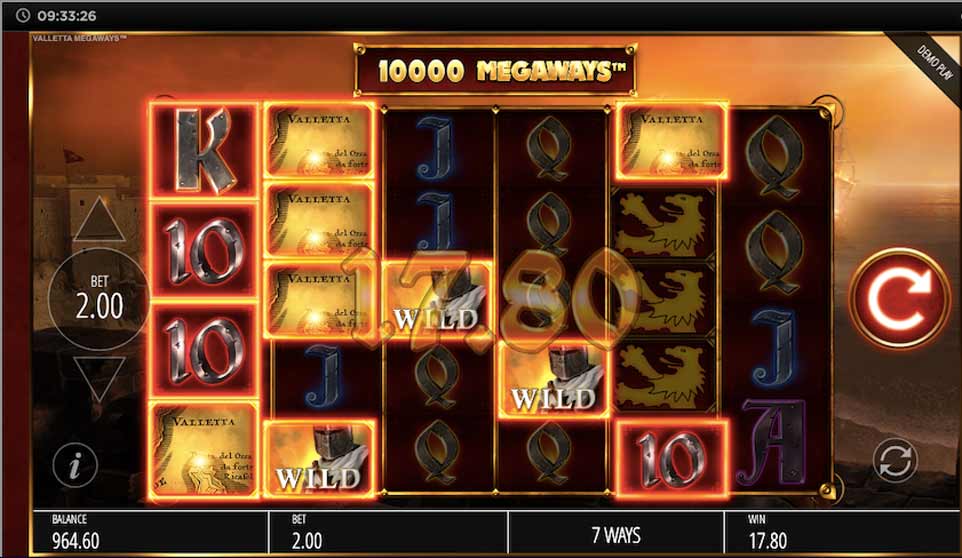 As always, we divide the symbols into different categories, so that you have a clear overview. For each category we provide you with the necessary information about the appearance of the symbol, but also about the amount of the payouts, for example: 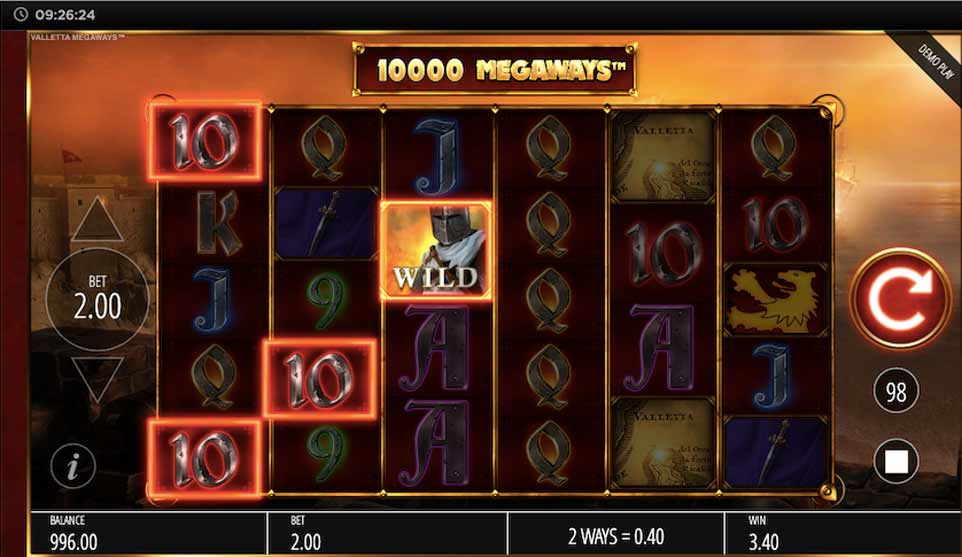 This feature can play after a winning combination, and is comparable to the slightly more famous feature ‘Sticky win’. The winning symbols remain and as long as you spin the same symbol in a turn, you get an extra respin. As soon as this happens and you get an extra spin, all arrows are shot into the playing field. 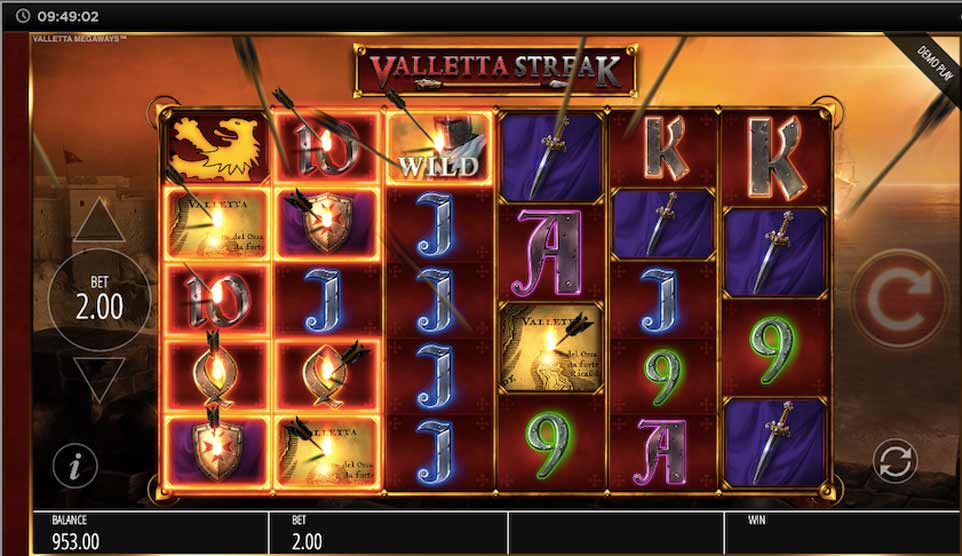 With this the combination can of course go very high, and the ultimate goal is a playing field full of the same symbol! 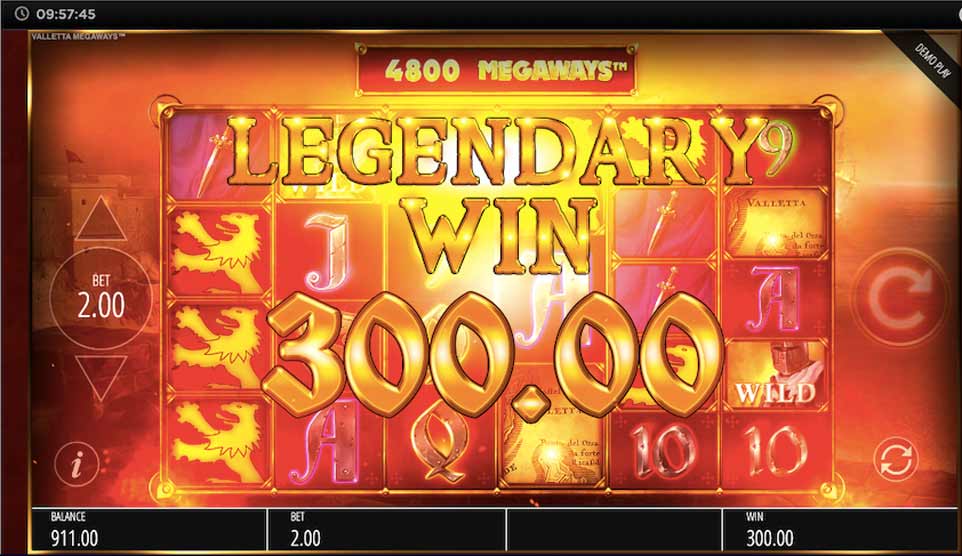 If this feature occurs, A red flag will wave just like the other feature. 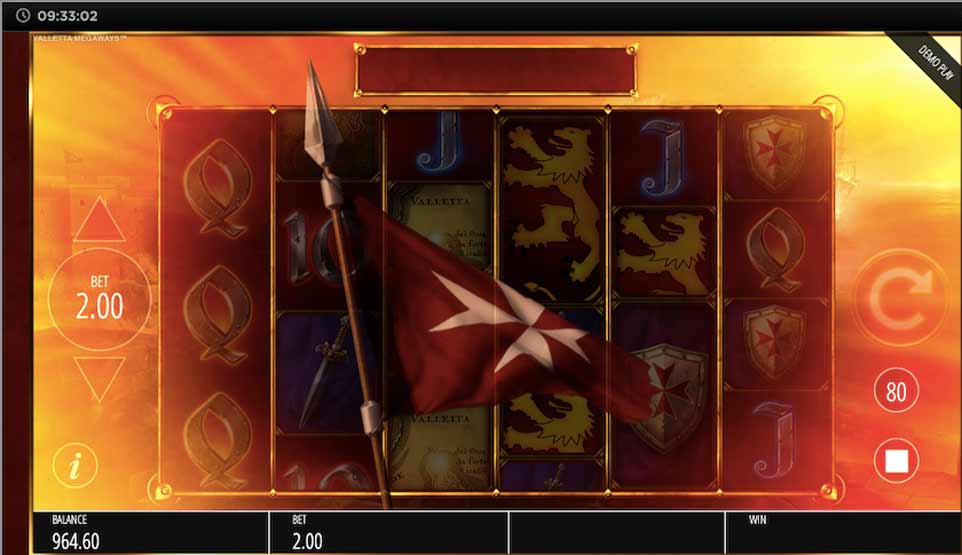 Per reel it will be shown whether a Wild falls on it. Because extra Wilds have been added to the reels during this feature, you have an increased chance of these Wilds. From left to right, each reel stops in sequence. Ultimately, it will show if you manage to get a Wild on every reel! 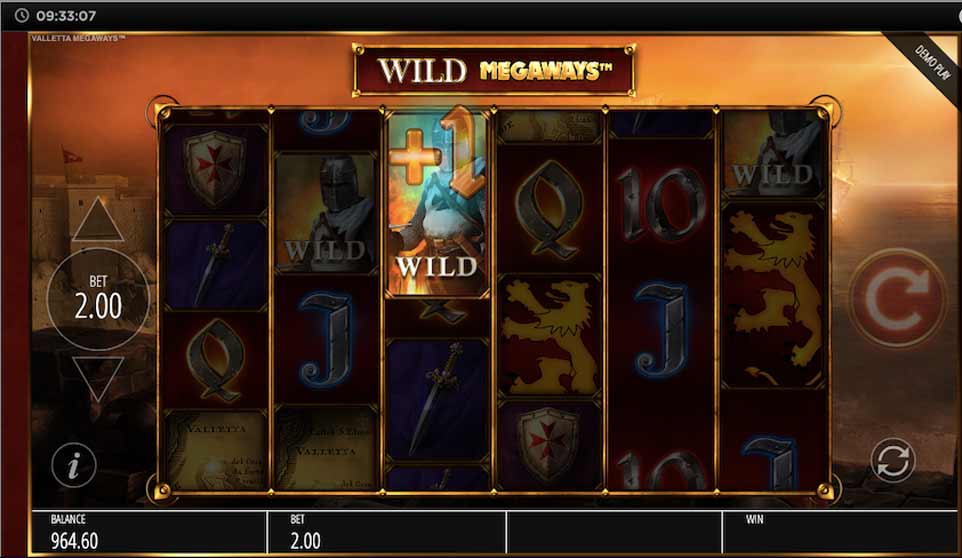 The big difference with the basic game is that you earn the ‘Valletta Feature’ after every winning turn, so you have the chance to win huge prizes almost every spin. 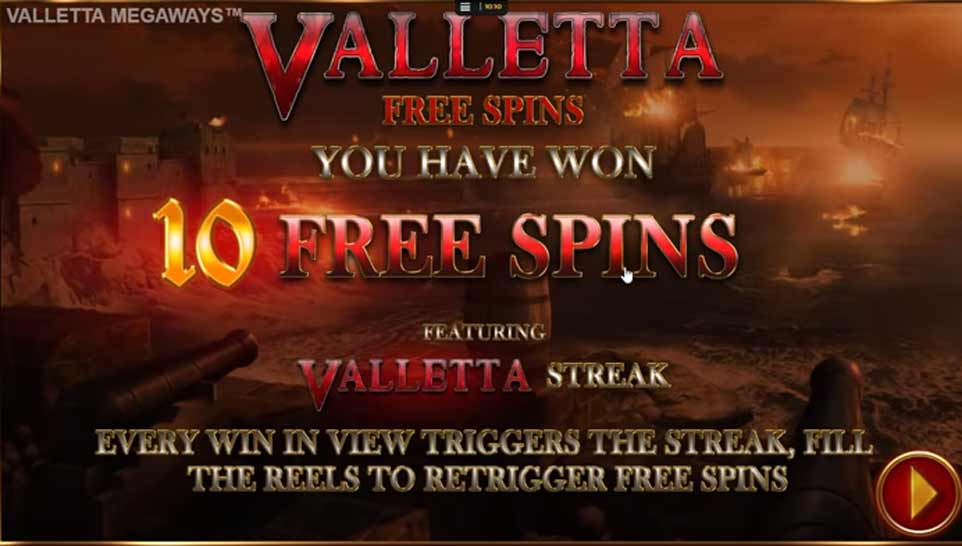 The maximum profit of Valletta Megaways is 250,000 euros, as with many megways games. In addition, the game scores 4/5 stars and we expect great popularity.

Basically, the game is very similar to other variants of the megaways series, but it also has some nice elements. We especially like the ‘Valetta Feature’, and the addition to the bonus round is really fantastic.