You can play White Rabbit since the end of 2017 and is a game from Big Time Gaming. The fairytale theme comes to the fore, and sometimes you are really amazed at what you see. With 248,832 possible ways to win, this game does stand out for a while. We think White Rabbit is a very nice game, and we hope to inform you sufficiently about this in the review below. 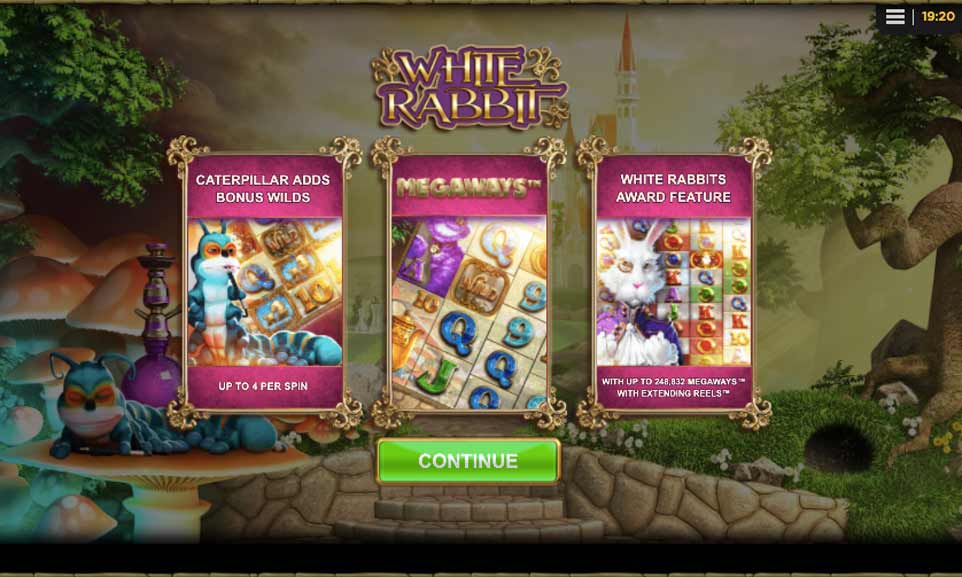 The RTP, or return to player, for this game is 97,93%. This means that the casino returns this percentage of all bets back to the players. The volatility or variance is high. A high volatility means that you win less frequently, but large amounts.

In the background you can see the fairytale theme fantastically expressed, with the absolute highlight being a caterpillar smoking from a water pipe. You also have a playing field consisting of 5 reels with an alternating number of rows, and at the top you see the number of possible ways to win that applies for that round. All options can be found at the bottom of your screen. From left to right you see: Choice of your bet, reference to the menu, the ‘Buy a Bonus’ feature, the autoplay function, and the ‘spin’ button.

How does White Rabbit work?

The game is very similar to a megaways game, as there are a certain number of reels with an alternating number of rows. With a maximum of 248,832 possible ways to win, that game does know how to distinguish itself. And to get you even further on your way to those big payouts, the sleeping caterpillar on the left side of the screen wakes up from time to time. He then blows you at least 1 and at most 4 extra wilds on the screen, with multipliers of 2x or 3x.

How do you play White Rabbit?

In terms of bet, you can choose from a minimum of 0.30 euro and a maximum of 20 euro per spin. The first step you take is to determine a bet, after which you only have to check if you want to use the autoplay function. The alternative to this is of course to just press ‘spin’ every turn. Then you no longer have any influence on the results and it is a matter of hoping for great prizes. You can also unlock the bonus round by collecting enough symbols, but the faster way is to buy the bonus round. More on that later! 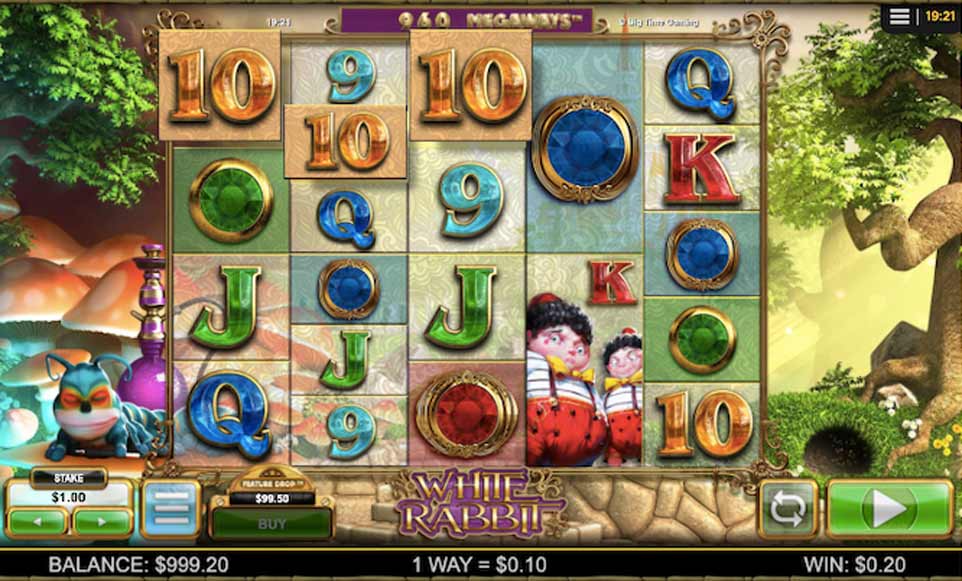 Most symbols appear in stacked form and take the form of a teapot, dodo, purple cat or top hat. The most valuable symbol is the red princess, and a 5 of a kind will get you 25x your stake back! After that, the gems and the purple cat are worth the most, as for a 5 of a kind you will earn back between 2x and 5x your stake. As usual, card symbols form the ‘low paying’ symbols and with a 5 of a kind yield only between 0.6x and 1.9x your bet. Of course there is also a wild symbol with which you can easily make combinations, as it can replace any other symbol! The bonus symbol is unfortunately irreplaceable, but if you collect enough you will unlock the bonus round! 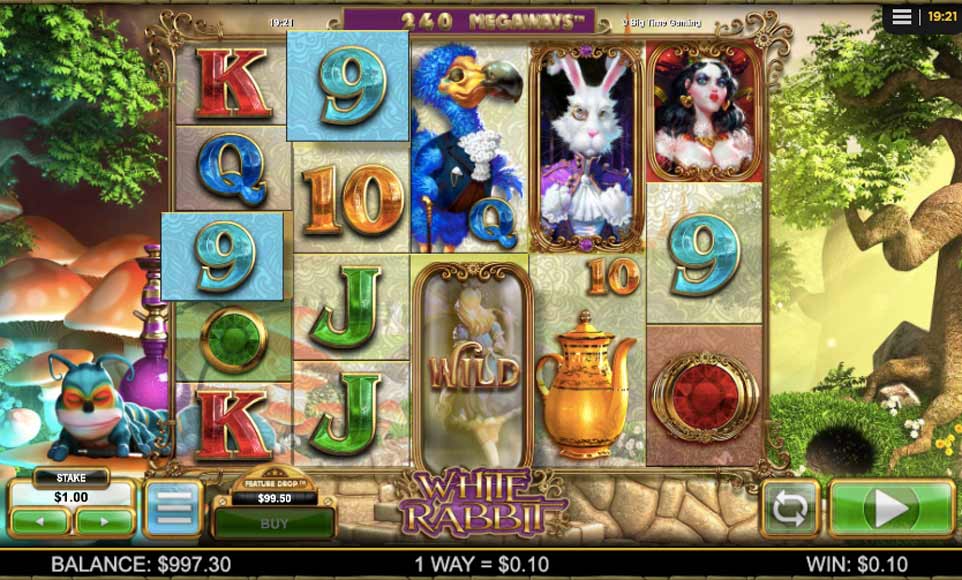 The Bonus Wild Feature can be activated at any time during the game. Up to 4 of these symbols are added to the reels at that time. If they are part of a combination, they also add a multiplier of x2 or x3.

The starting situation is as follows: You receive 15 free spins and play on a field of 5 reels with 5 symbols per reel if you collect 3 scatters. 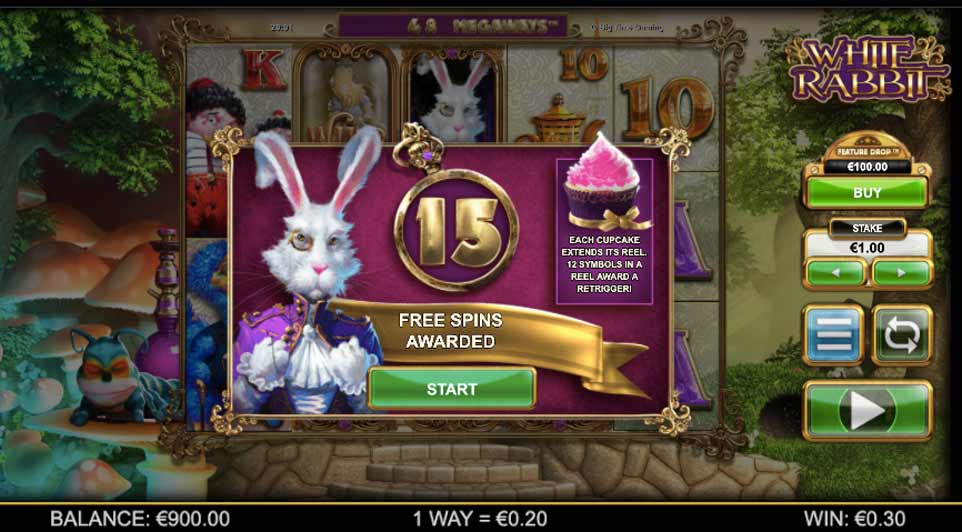 The cupcake is of great importance in the bonus game, as the reel expands by 1 symbol for each cupcake. If you manage to expand 1 reel to 12 symbols, you will receive 15 spins again! The more cupcakes you collect, the higher the payouts! The wilds also participate in the bonus round, but unfortunately the White Rabbit symbols do not. Do you completely unlock all reels? Then you have 248,832 ways to win! 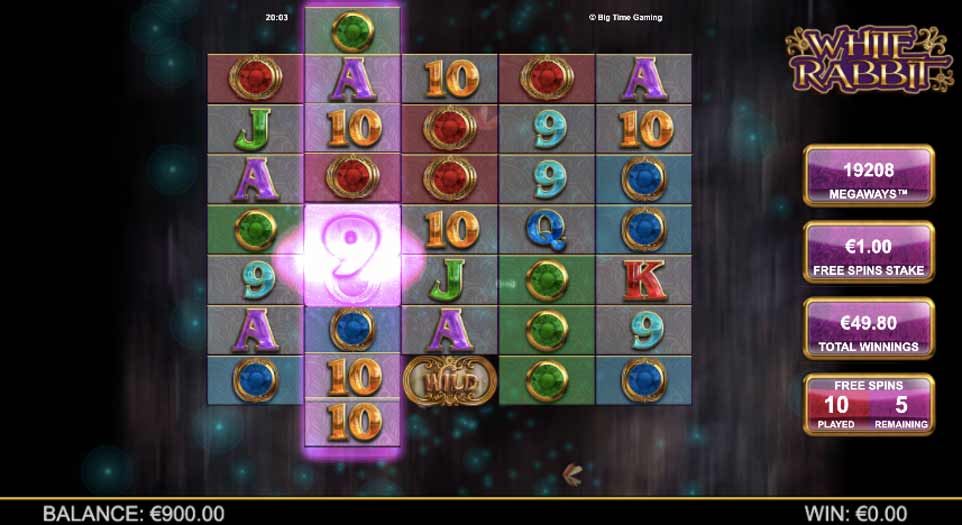 This popular feature will cost you 100x your chosen stake in ‘White Rabbit’, but you have the option to lower this slightly during the base game. By collecting coins you can reduce the price slightly. 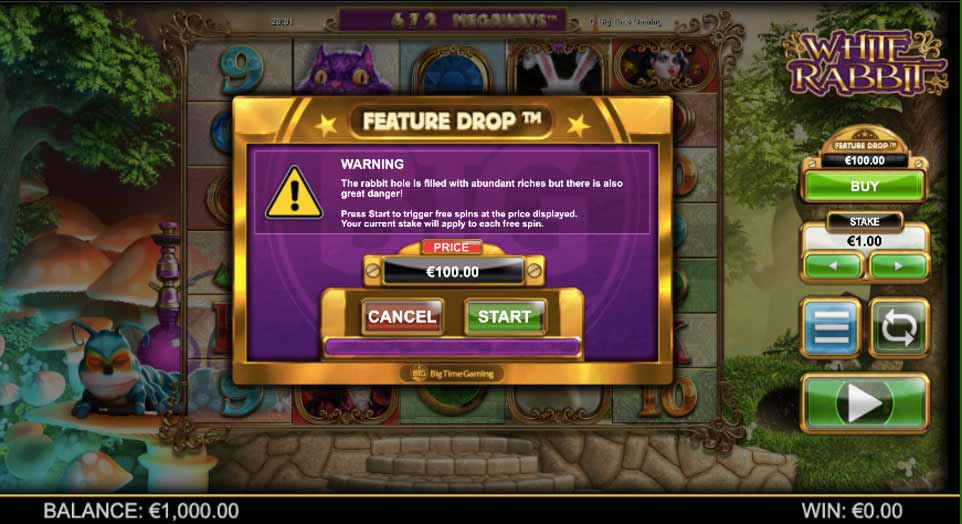 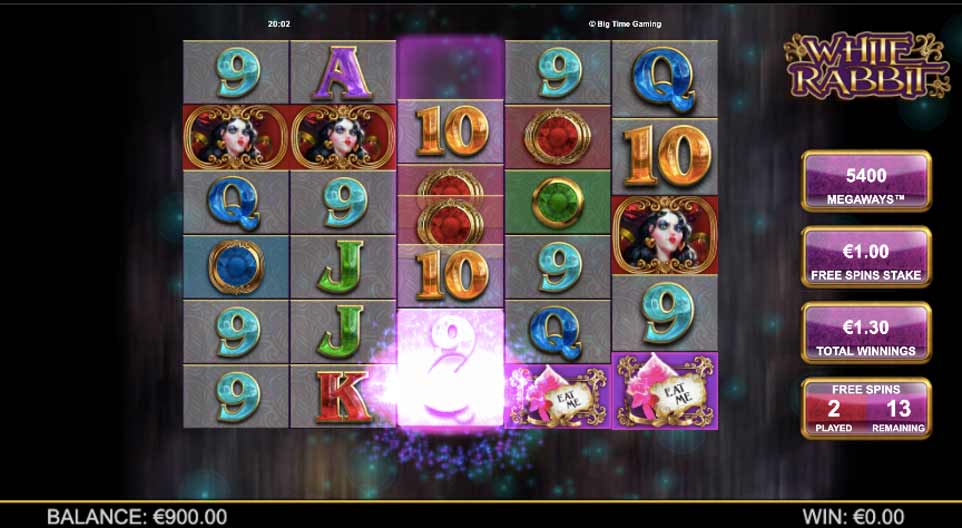 The maximum winnings at White Rabbit are unlimited, which attracts many players. In addition, the game scores a well-deserved 4/5 stars.

An RTP of over 97% is very scarce on new slots, but Big Time Gaming goes against this trend with a 97.38%! It is also a super fun game and the maximum profit is unlimited. Highly recommended!